Whereas entitlement has many ramifications, there are a few that stand out as especially destructive. One of these comes to the issue of authority.

As I mentioned before, one basis for entitlement is the belief in personal rights. Other, more collectivistic, cultures prioritize your responsibility to your community. Here in America, one of those overarching rights is the right to be happy. As few as 50 years ago, most people’s concept of happiness was that it stemmed from accomplishments like doing a good job at the workplace, raising responsible children that contribute to society, relating with your friends, and doing things for others. Since the mid sixties, the prevailing theory has shifted away from gaining happiness by serving others to finding fulfillment in serving yourself. I believe this has been a problem from the beginning of time, but serving self is now more blatant than ever.

Those born after 1970 have been indoctrinated with the belief that they are the center of the universe through every major medium possible: school, TV, movies, books, and the home. Individualism and self are our gods of the day. If you are raised with the belief that you are #1 – then you really only answer to yourself, right? You are your own authority.

In the book Generation Me, the author states “…young people say that the most important quality a child can learn is ‘to think for himself or herself,’ and only half as many young people as old say that obedience is a good lesson for children”. I am not surprised by this at all. 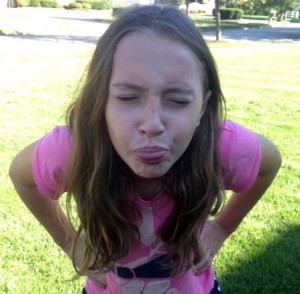 Half of the shows my kids watch are designed around the premise that the parents are absent (or stupid), and they need to make their own decisions about things. A current example of this is iCarly, a show where a 15 year old has her own internet show, and the parents are AWOL. Apparently the father lives on a submarine and mom is never mentioned. Carly is being raised by an idiot brother, so all decision making has to come from her, with maybe the input of her two best friends, who are her age. If this show were magically transported back in time and broadcast on TV in the 50’s, it would have been blasphemous. On just the issue of lack-of-authority, it would have stood out like a sore thumb contrasted with shows like Father Knows Best, Ozzy and Harriet, and My Three Sons. Even against shows from a few decades ago, such as Little House on The Prairie or The Waltons. If Leave It to Beaver debuted today, everyone would assume, based upon its title, that it was a show about a kid who has victories in making his own decisions. Ironically, the show was more about how when Beaver tried to do things on his own and not listen to the authority of his parents, he often made the wrong decisions.

Our society sees this self-authority as liberating and powerful, but what it has actually done is cut our youth off at the knees when it comes to any prospects for having a successful life. When you never learn to submit to authorities properly as a child, it can hurt you in several ways. One of these ways is functioning in society as you get older. Generation Me gives this example:

“…sometimes GenMe takes the questioning of authority a little too far. Education professor Maureen Stout tells the story of a young man in her class who did not turn in his research paper. ‘After a lot of arguments he finally came out with it,’ Stout writes. ‘He believed he was entitled to do just as he pleased and refused to recognize my authority, as the instructor, to determine what the assignments in the class should be.’…..The message? We are all equals here. I might have a Ph.D. and years of experience, but that doesn’t mean I know more than you. This is, of course, a lot of the reason for the crumbling of authority and the new questioning of those in charge.”

When people in a society are raised with the belief that THEY are the ultimate authority, you are going to run into some problems. Not everyone can be the ultimate authority, so what you have eventually is a society made up of people that will be angry, bitter, depressed or heartless - and ultimately cannot function. This is what we see played out in countries like The Democratic Republic of the Congo, where since the Second Congo War in the late 1990’s there has been no effective authority. Only power prevails; those who have the biggest guns get their way. So what they have been left with is millions of people killed and those left either torturing or being tortured. According to the Washington Post last year,

“The prevalence and intensity of sexual violence against women in eastern Congo are ‘almost unimaginable,’ the top U.N. humanitarian official said Saturday after visiting the country's most fragile region, where militia groups have preyed on the civilian population for years….Violence and rape at the hands of these armed groups has become all too common…The intensity and frequency is worse than anywhere else in the world."

The bible predicted the world would come to this in 2 Timothy 3:

“But realize this, that in the last days difficult times will come. For men will be lovers of self, lovers of money, boastful, arrogant, revilers, disobedient to parents, ungrateful, unholy, unloving, irreconcilable, malicious gossips, without self-control, brutal, haters of good, treacherous, reckless, conceited, lovers of pleasure rather than lovers of God, holding to a form of godliness, although they have denied its power; Avoid such men as these. For among them are those who enter into households and captivate weak women weighed down with sins, led on by various impulses, always learning and never able to come to the knowledge of the truth.”

When you love only yourself, it is very difficult to have real, loving relationships with other people, let alone submit to anyone’s authority. In this verse, everything listed after “lovers of self” really just describes the outcome of how a self-centered person relates to another (or can’t relate, really). They can’t love others, because they can only love themselves. So the game becomes one of take, take, take and never give.

Related to this, another way that never learning to submit to authorities can hurt you is in your spiritual life. If one never learns to respect authority, how can one learn to come into a relationship with Christ? Coming to Christ involves the acknowledgement that you have sinned against the ultimate authority – God – and that you need to ask his forgiveness. If, in contrast, you believe that you are the ultimate authority, then there no need for forgiveness or God. This alone is the saddest and grossest part of being raised in an entitled culture and submitting to no one, because it can interfere greatly with your eternal salvation. Thankfully, through the power of the Holy Spirit and God’s Word, I have seen those deeply engrained with entitlement get convicted and they do come to Christ. However, the struggle of allowing God to sanctify them can be a difficult and rough road.