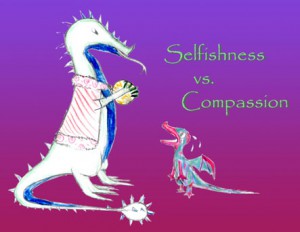 Selfishness is such a core component of entitlement that I will need to make this its own section someday, but you can imagine all the facets that this may have. An entitled attitude says that you are the center of the universe, so when anyone infringes on that it gets ugly. I saw this today. I was flipped off because I needed to be in the right lane to exit the freeway. Regardless of being many car lengths ahead of the car that was in the next lane, when I moved over they became really angry. They sped up, rode my tail, and flipped me the bird. I guess I missed the memo that stated that THEY owned that stretch of freeway and I had to watch for their silent cues to know when to move!

The entitled person has a very “me” focus. They feed off that selfish drive to find ways to make their self happy. After all, this is the tagline of our culture now – “you are amazing” and “you need to look inside yourself to be happy”. Arnold Schwarzenegger, who has been in the news lately (for not-so-good reasons), has a daughter names Katherine who just wrote a book called “Rock What You’ve Got.” According to RightCelebrity.com, the book is a motivational piece that focuses on inspiring young females to realize their true value, and to help instill in them a sense of higher self-esteem, regardless of things like weight and looks. Here is an excerpt:

“The best piece of advice my parents gave me is always to be who I am and to stay true to who I am,” Schwarzenegger said. “Young girls get so lost in society today with the amount of peer pressure, pressure from the media, pressure to be something they are not. My parents always made sure to reinforce to me how important it is to stay true to your values, beliefs, and who you are, because being who you're not is where you can get in a lot of trouble."

On the surface this seems good. I agree that what is cranked out by the media pressures girls to look and act a certain (inappropriate) way, and they should stand against it. But the postmodern solution to this is to look within yourself to whatever value system YOU set up, and YOU believe in, and it will all be OK. Also in the book, Katherine tells about a videotape her parents took of her when she and her sister were little. They were in their high chairs and saying loudly "I'm beautiful, smart, nice, and kind . . ." over and over. While she admitted the tape is “a little embarrassing to look at now,” she acknowledged it was one of the building blocks to their “self-confidence and self-esteem.” It’s all the focus on self that I think is misguided.

The thing about selfishness, and looking to yourself for your happiness, is that it doesn’t work in the long run. I mentioned this in an article I wrote a number of years ago when I was researching the self-esteem movement. I won’t re-quote the research I found (if interested you can read it here), but the bottom line was that the self-esteem movement probably did more damage than good. I don’t think it is a coincidence that since our culture started pushing “self” as a way to happiness that our rates of depression, anxiety and emotional problems have increased.

Ironically, sustained happiness is gained by looking beyond yourself and focusing on other people. The bible supports this view, and even secular sources are figuring this out. In the Winter 2009 issue of “Yes!” magazine, there was an article called “10 Things Science Says Will Make You Happy.” The article concludes that after worldwide research by a collaboration of researchers, psychologists and ethicists, things like gratitude, relationships, exercise and altruism help people be more happy.

When you develop altruism, or compassion, you have the ability to look beyond yourself and to the needs of others. As it says in Philippians 2:3-5:

“Do nothing from selfishness or empty conceit, but with humility of mind regard one another as more important than yourselves; do not merely look out for your own personal interests, but also for the interests of others.Have this attitude in yourselves which was also in Christ Jesus.”